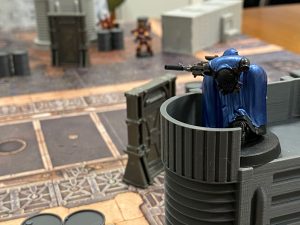 The Khorne side had a bit of bad luck with the dice rolls and largely failed to get into close combat before being fired upon by the RG team. The Raven Guard did suffer from their own bad luck, though, and in one shooting phase every single model except the Eliminator managed to spectacularly miss. The Eliminator did somewhat make up for that by managing a spectacular shot that took out the Khorne Aspiring Champion with a mortal wound scored from an Executioner round.

We introduced command points for this battle and they were well received – tactical reroll in particular was popular. Raven Guard came out on top points-wise, though it would probably have been a different story had the Berserkers managed to close like they intended.